Meaning: A prayer to our 'guru parambara' or great lineage. Admiring the great ayurvedic lineage started by Lord Brahma (who understood ayurveda through his noble thought) and then conveyed to Vakbhatacharya and through the ages, it was finally passed on to my masters or 'gurus'.

'Mana' means family house of the Namboodiri(Kerala Brahmins). Poomully Mana, is a Namboodiri family home situated in Kerala, having a history of more than 500 years. Poomully Mana, was once recognized as one of the cultural centres in Kerala. The members of Poomully Mana were famous as practitioners and experts in Ayurveda, Rig-veda, Yoga, Kalari (martial-art)Music & other cultural arts. Late.Sri.Poomully Narayanan Namboodirippad(father of Aramthampuran & famous Rig-veda practitioner), Late.Sri. Poomully Raman Namboothiripad, the exceptionally talented student of the famous musician Chembai Vaidyanatha Bhagavatar and Late.Sri. Poomulli Neelakandan Namboothiripad (Aramthampuran) the inimitable ayurveda practitioner, are better known among them. Many reowned personalities from within the country and abroad visits mana for Ayurveda treatments and for practice in arts & cultural forms.The Poomully Mana's buildings and structures are in traditional Kerala style architecture. They were reconstructed under the initiative of the Late Poomully Narayanan Namboodirippad, who was the father of Poomully Aramthampuran. The Poomully manor is a brilliant piece of architecture. Its authentic design was much appreciated worldwide. The manor was reconstructed by the gifted designer-architect Vellanezhi Namboothiripad, who also reconstructed the Koothambalam at the Thrissur Vadakkunnathan Temple. 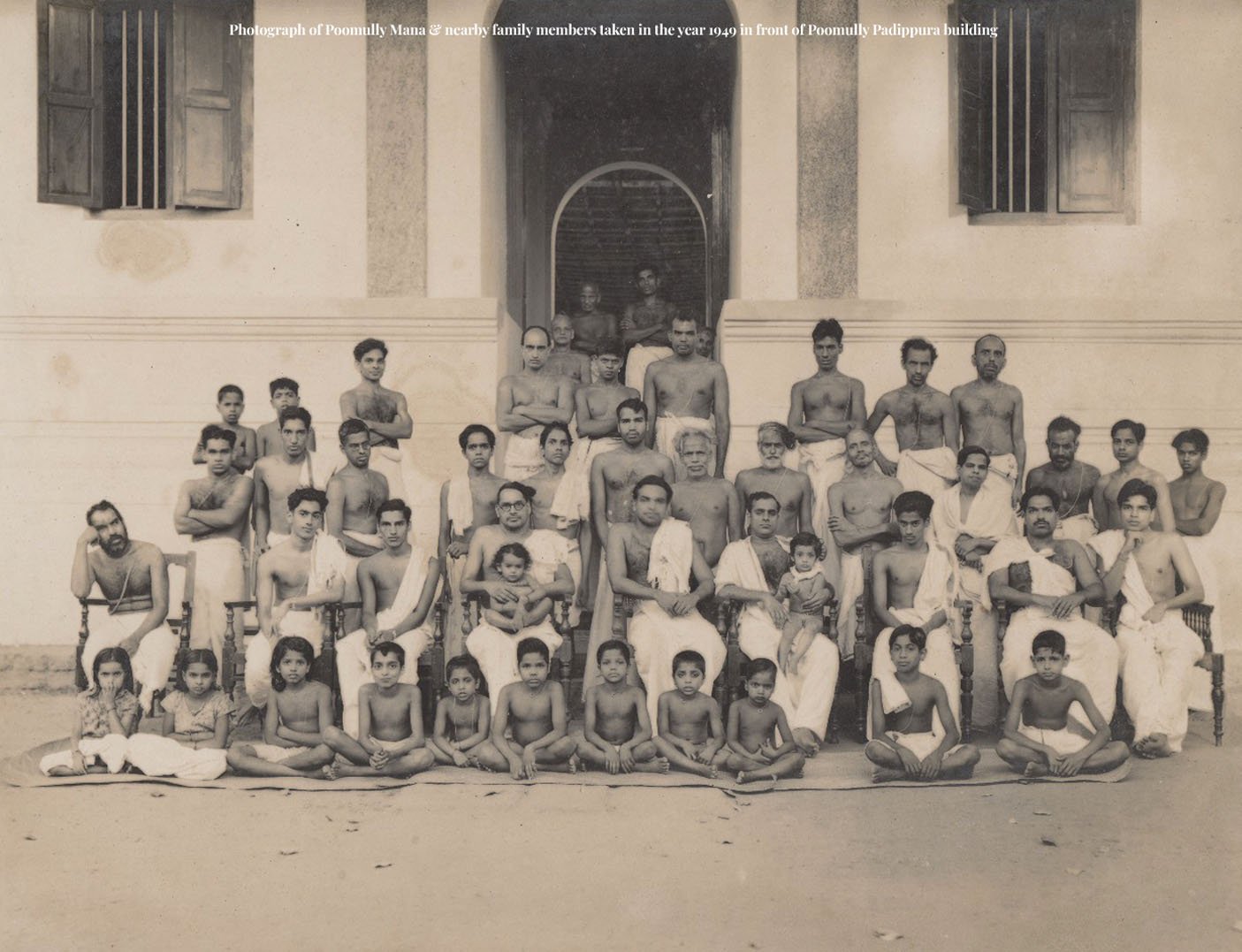 The Poomully family also encouraged research into the sciences, especially ayurveda. The Mana's library still has a huge collection of ancient manuscripts and books on ayurveda and other sciences. The Kutipraveshika treatment(Rasayana Chikitsa) to be recorded in the last century, took place at Poomully Mana in the year 1953. Poomully Vasudevan Namboodirippad had undergone Kutipraveshika treatments, under the supervision of Poomully Aramthampuran and Vaidyamadham Valiya Narayanan Namboodiri. The name & fame of Poomully Mana came on the shoulder of authentic Ayurveda treatments, kalari chikitsa etc. and innumerous people have benefitted from this.

The "Poomully Way" of ayurvedic treatments, designed by Aramthampuran with reference to classical ayurveda texts, is being followed at Poomully Mana. ‘Poomully Mana’ is being used as a heritage centre for ayurveda treatments under the ayurvedic doctors from present generation of Poomully Mana family, by maintaining the traditional values and principles which heighten the processes.

The person who had undergone kutipraveshika treatments

The Poomully Mana was a Namboothiri family residing in Ūrakam of Peruvanam village, Kerala, about 900 years ago. They built the original Ammathiruvadi Temple, left all their wealth to the temple, and its administration to the Kingdom of Kochi. They then resettled themselves in Peringode (present-day Palakkad).

Legend has it that the Namboothiri (while residing in Peruvanam village) went to Kanchipuram to visit the Kamakshi Amman Temple. Happy with the devotion of the Namboothiri, the Godess Kanchi Kamakshi decided to come to Kerala, on his palm leaf umbrella, unknown to him. He reached home and placed the umbrella on the floor inside his house. When he came back later, he was unable to lift the umbrella off the floor as it was heavily weighted down to the floor. Later, it was revealed that Kanchi Kamakshi was still stationed upon that umbrella. That night, the Goddess came to the Namboothiri in his dreams and let him know that he was expected to build a temple for Her, and then leave Ūrakam altogether. She also let him know that he was to go forth and find an idol in a well far away, and invoke the goddess from the umbrella top, into that idol. Namboothiri did as the goddess had willed and after he built the temple, he left all his worldly possessions to it.

The Poomulli Mana family, later grew to be one of the richest and most powerful Namboothiri families in Kerala and one of the biggest landlords of the Malabar. The head of the family used to be invited to all the important functions in the court of the Samoothirippad of Kozhikode, and the Maharajas of Thiruvithaamkoor. The family was well known for its hospitality and considered 'anna-daanam' as their dharma. In 'Aithihyamala' (an anthology), Poomully Mana figures in the descriptions of families with glorious history.